Theirs is the glory 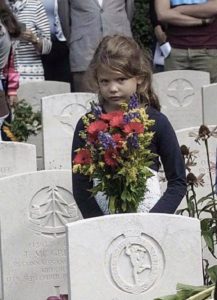 Most of us, particularly the Para Regt guys, will remember the film “Theirs is the glory”. It was shown to recruit platoons in the Depot to provide them with regimental history.

Perhaps what not of them knew was the chain of events that came from the production of the film. When the lads, from 1st Airborne Division who had taken part in Operation Market Garden, returned to Arnhem, in 1945, to make the film an idea was born. The suggestion was made that there should be an annual commemoration of the battle and a memorial service at the Airborne Cemetery.

The very first Memorial Service was held on the 25th September 1945 and Dutch schoolchildren laid flowers on the graves. They have continued to do this ever since.

It is always the most emotional part of our ride to Arnhem when the children enter the cemetery, stand in silent respect and then lay their flowers on the graves.