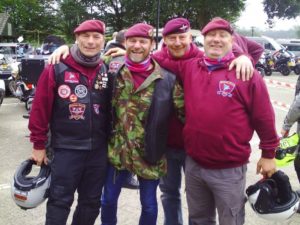 A mate of mine, one of those funny “civilian” people, asked me why I was so enthusiastic about my rides with the Airborne Forces Riders. “Surly” he said “you can get just as much fun with the local rides that you do”.

Love him to bits but trying to explain “airborne brotherhood” to him would be like trying to explain nuclear physics to an infant.  So, using my ABI I did the next best thing.  I invited him along to Arnhem 2015 and he accepted.  Needless to say, he had a fabulous time and his whole attitude to life underwent a major alteration.  He said that stuff which had niggled him before going to Arnhem had become insignificant.  He had, in a very short time, realised that there are more important things in life and that life is too short to be small.

I, of course, was delighted with his positive response but felt that, before going this year (wild horses wouldn’t have stopped him) he needed a little more education in the ways of the Airborne warrior.  So, I lent him my DVD of “Kajaki” and told him to watch it before we set off.

“Got it!, got it! I understand now” he shouted.  “I watched that film in total silence with my missus and now I understand.  It’s more than friendship, as I know it, it’s much, much deeper.  That explained to me why you are all so disrespectful of each other.  I couldn’t understand why you were all taking the mickey out of each other, calling each other rude names and all that.  Now I get it.  It really is “brotherly love”

“Oh, yes” I said, with a grin “It is much deeper than that.  Our shared experience, particularly the hardships, have forged a bond that is lifelong and deeeeeep”

“Sorry pal” I said “This is one club you can’t just join, can’t buy your way into, can’t use you family connections, can’t marry into.  It is the best boy’s club in the world…and I love it”