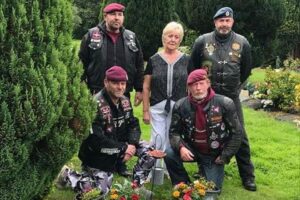 Write up on the ride in the daily record

A group of veterans will ride into Hamilton this week to pay their respects to a local fallen Falklands war hero.

Airborne Riders of Respect members Paul Moore, Charlie McColgan, (both Falklands veterans) Phill Damant and Tony McKie are on the third day of their motorbiking tour around the UK visiting the gravesites and memorials of men of who lost their lives in the Falklands in 1982.

The foursome will travel a total of 2600 miles in 15 days, visiting over 80 graves and memorials of the Falklands war in a bid to promote remembrance, respect, awareness and support.

And their tour will see them hold a memorial in Wellhall Cemetery, Hamilton, on Tuesday (August 3) to pay respects at the grave of a local lad Cpl David Hardman MiD, 2 Para, who was killed in action 39 years ago on May 28, 1982 at Goose Green, Falkland Islands.

They are expected to hold their memorial at approximately 4.45pm within the cemetery.

Veteran Paul Moore explained the reason behind the tour.

On his JustGiving page he said: “We are doing this ride to demonstrate that these men are not forgotten, to pay our respects to each one and their families, and to raise funds for the South Atlantic Medal Association who continue to support veterans of the Falklands war and most importantly, the families who have lost loved ones.

“In 2021 we will be putting both of those rides together making a ride of over 2400 miles that will encompass the graves and memorials of 2 Para, 3 Para, SAS, Scots Guards, Welsh Guards, Royal Marines, SBS, Royal Navy, Merchant Navy, Royal Engineers, Royal Signals, Gurkha Rifles, Army Catering Corps, Royal Army Medical Corps and Army Air Corps. We will cover the whole of the UK.

“During the ride, any of our supporters, families and friends are welcome to join us.”

The 40th anniversary of the Falklands war will take place in 2022.