Charlie McColgan, ex 9 Sqn and Falklands vet, was so taken with the flower children in Arnhem that he hatched a plan last year.  The flower children lay a flower on the grave of the fallen men of Arnhem at the military cemetery in Oosterbeek.  His plan was to raise funds to enable a beret to be given to each of the children each year (some 1400 a year).  Initially he asked for beret donations and they flooded in.

After discussions with the organisers in Arnhem, it was felt that an annual pin badge would be a better idea.  They would be more discreet and would become collectable, something children (and adults) like to do).

It’s been a while since my “ last post” for the Flower Children of Arnhem”. Some of you know but if you don’t, last year I set out to try and present every kid who was laying flowers at the Oosterbeek Airborne Cemetery with a beret to wear this year… the response was incredible and between Richard Stacey and myself we have over 500 berets from all over the world… On negotiations with the committee who organise the “flower children” it was decided that giving the kids a beret wasn’t the way to go forward to thank them for what they do each year remembering our falling…( there is a plan for the berets and I will update soon) instead between both parties we have rekindled an old tradition of presenting the kids with a token of appreciation for what they do. This will be in the form of a Pin badge which hopefully will be a collectible item as each one will be the same but the year will change… my idea is to produce 2000 each year(1500) for the children and 500 up for grabs for a £5 including postage( details to follow). This way we can raise enough money to provide the pin badges every year …. I can only feel most humbled for the support this idea has had but at the end of the day, these children deserve our thanks as anybody who has been to Oosterbeek on that Sunday morning will understand.

Here is the pin: 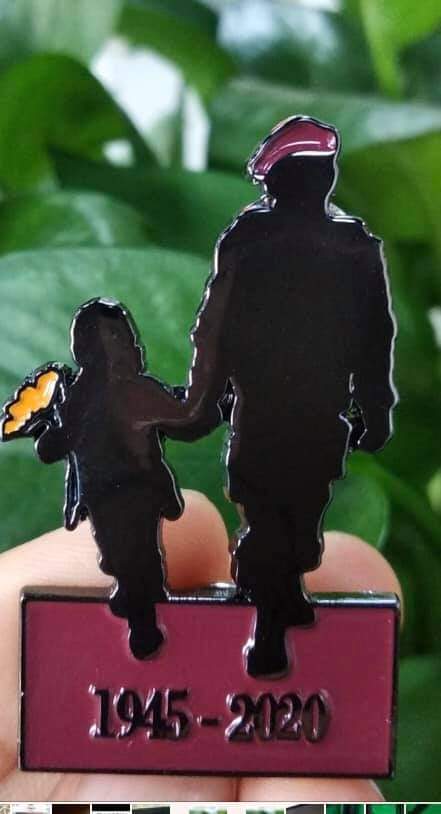