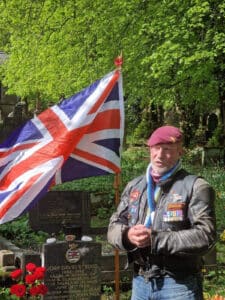 The Airborne Forces Riders were formed in September 2014 during our annual pilgrimage to
Arnhem. Currently we have around 650 listed members from all units within Airborne
Forces (about 550 Riders and 100 Supporters). Since formation we have gained an excellent
reputation both in the UK and in the Netherlands for conducting ourselves well, operating
professionally and demonstrating respect for all who we deal with. In 2021 Lt Gen Sir John
Lorimer agreed to become Patron of the Airborne Forces Riders.

Why a Riders Branch?

Essentially, we have been operating as a Branch in any case, but without the formality of
organised and documented meetings, agenda’s and minutes. We could happily continue
this way without further work, however, we have come to a point where we have grown to
be so large and take part in so many events that the time has come to be more organised
that we have been. In short, it is the next phase of our evolution.

I am not a member of the PRA, can I still ride with you?

Yes you can. It will make no difference. If you are Airborne trained and a motorcycle rider
then you are an Airborne Forces Rider irrespective of whether you are a member of the PRA
or not. Of course, we would like you to join the PRA Riders Branch when it is set up, and at
only £5 a year why not? By joining you would become a verified PRA member which helps
us to keep out the Walts, you will also be contributing to a charity that supports our
Airborne Brethren and making the Branch stronger.

What are the advantages as a Branch?

Recognition! Looking around at the military biker scene most Corps / Regiments have their
own Riders Association or Branch. Having spoken to some of them they all report that being
‘officially’ formed has given them formal recognition from their parent Headquarters and
thus a status and partnership that did not exist before. This has the added benefits of
increased numbers joining and invitations to take part in some events as a bike group.

Being a Riders Branch of the PRA will give us ‘protection’ of RHQ / 16 Brigade as
described above. Note that Patron of the PRA is HM The King and we are lucky enough to
have General Lorimer as our Patron. This is an extremely privileged position for us to be in
and thus our official sanction as a Riders Branch gives a degree of protection and assurance
both ways .

We will be covered under the PRA Third Party Liability insurance while we are acting in an official capacity as a Riders Branch during an organised and officially sanctioned event. This does not absolve us from our own personal and bikes insurance responsibilities.

Since our formation we have supported several charities associated with Airborne Forces both in the UK and in the Netherlands, more or less by everyone chipping in to help. As a Riders Branch we will be able to fundraise officially (and legally) and we as a Branch will be able to decide how and when those funds are disbursed, including assisting an individual in time of need if required.

Currently we require a budget of around £350 per year just to cover the number of crosses and wreaths we lay in our various acts of Remembrance at Arnhem, Double Hills and Ride to the Wall. We have been lucky so far as we have been able to ‘wing it’ by individuals donating these or by scrounging them, but we cannot continue this way and maintain our reputation. We must be able to cover our own costs independently.

At a recent meeting of the PRA Regional Co-Ordinators the formation of a Riders Branch was
discussed and received overwhelming support. Therefore, we are currently in a period of
‘probation’ while we get ourselves organised and get the necessary people in place to
manage the Branch. We asked for volunteers to take on those roles and currently these are:

There are a few vacant posts and it is hoped that volunteers will be found from within the
Riders.

A Branch co-ordination meeting was held online on Friday 13 January 2023 and various
individuals have a few things to investigate from that. The first Branch in-person meeting
will be held on Saturday 29 April 2023 at Cleethorpes PRA at 1700 Hrs, where post holders
will be formally elected into positions. Please attend if you can. In future, meetings are
likely to held to coincide with planned rides. These are likely to be: