The Ride of Respect remembers  the brave men and women who fought in the Falklands, but did not return (REMEMBRANCE).  We ride to pay our respects to them (RESPECT).  They never became veterans and will stay forever young and we will, every year, raise the public awareness (AWARENESS).  Funds that are raised by our ride are donated to SAMA, The South Atlantic Medal Association, to pay any needs , that veterans that did return, may have (SUPPORT).  It will be conducted on the weekend of 10 / 11 June 2023.  This year, the ride will be broken down into Regions.  Each region will have a group organiser who is responsible for the organizing and execution of the ride.
The regions are:

Polo shirts are available from Clive Butland. Available with your name and in the following colours:  Maroon, Black, Navy Blue and RM Green.  Send him a private message on Facebook to order.  £5 is donated to SAMA for each one purchased. 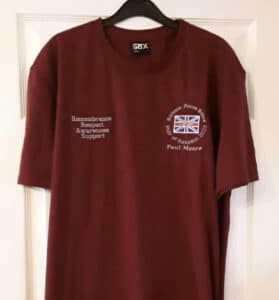